After reading Cardinal Newman’s “The Development of Ideas” I came to the conclusion that ideas and doctrine do not just come about.  They started from an idea that was debated, was allowed to germinate, and must be allowed to mature.  This can only be done through debate and reason.  What is interesting is that this work was the turning point of Newman to Catholicism.  As many do he started as an evangelical, then Anglican, and finally seeing the ideas and doctrines that had matured, became a great asset to the Catholic Church.

Newman explains that at first man will have an idea, but will not be sure how to explain.  He may seem like a babbling fool unable to make a coherent point about the idea.  However over time something will be brought to light that will move the idea forward.  This new fact will be debated and judged by many, and after a time there will be something definite that comes from it.  Over time there may even be various views on the same subject, but there will be a definite teaching that came from the original idea.  History will show that great teachings of history can be boiled down to its original idea and this helps us understand it all the more. 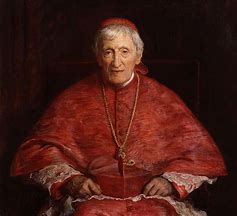 This process, especially in terms of doctrine, can take a lot of time to develop.  It has been shaped and formed from many brilliant people with their own take on it.  We all have different experiences and an idea may mean something different to different people.  The ideas that came from the great councils of our church are great examples of this.  All the Bishops gathered together with their own input, and the Holy Spirit guided them in defining doctrine.  There was much debate and everyone learned from another.

2 thoughts on “Cardinal Newman and the Development of Doctrine”