Scripture tells us in 2 Timothy 3:16 that “All scripture is inspired by God and is useful for teaching, for reproof, for correction, and for training in righteousness.”  However, there are some books that have been absolutely instrumental in forming Christian doctrine and thought.  One of those books is Ephesians, and the other is Romans.  Raymond Brown writes “Among the Pauline writings only Romans can match Ephesians as a candidate for exercising the most influence on Christian thought and spirituality (Brown, page 620).”

Ephesians is also a source of controversy among various groups in Christendom.  One of the issues being addressed in the letter is that the love for God is not only singular, but requires love of neighbor and thus community.  A way of living faith is intertwined with the love of neighbor.  In is in this regard that one of the most popular passages of scripture is sometimes taken out of context.  Ephesians 2:8-9 states “For by grace you have been saved through faith, and this is not of your own doing; it is the gift of God-not the result of works, so that no one may boast.”  This is taken by the Sola Fide crowd as meaning that all we need is faith.  Believe Christ has forgiven you and you have nothing else to do.  This contradicts the context in which this passage should be read as the next verse puts it into perspective.  Ephesians 2:10 states “For we are what he has made us, created in Christ Jesus for good works, which God prepared beforehand to be our way of life.”

We are indeed saved by faith, but there is more to it.  We are a community of believers and we must take care of each other.  We are to take care of the poor, the sick, and intercede in prayer for our Christian brothers and sisters.  Our faith is to produce good fruit for the Christian community, because a faith kept to ourselves will ultimately die.

A second issue illustrated in the Epistle to the Ephesians is that marriage is compared to the relationship between Christ and the Church, which is a large development from the earlier letters. Marriage is given a spiritual position.  This is another portion of the Epistle that is taken out of context by some.  Ephesians 5:22 states “Wives, be subject to your husbands as you are to the Lord.”  Some take this to mean that wives are to “obey” the husband and be subservient.  However this is not the case as the other verses puts that theory to rest.  Ephesians 5:25 states “Husbands, love your wives, just as Christ loved the church and gave himself for her.” In a sort of ironic way I like to point out that obeying one’s husband is one thing; dying for one’s wife is another.

Brown states “The obligation for the husband to love is treated more extensively than the obligation of the wife to be subject, and both are rooted in God’s initial plan for union in marriage (Brown, page 624).”  Christ came and died for us because he loved us.  This is the responsibly of the husband, and that is to emulate Christ’s love to his wife.  In this regard we are to care, love, and serve just as Christ did for us. 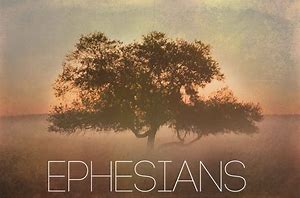 One thought on “The Letter to the Ephesians, Faith, and Marriage”