What is Pelagianism?  It is a system that relies on the sufficiency of man’s will (Hardon).  Pelagianism was started by a Bishop named Julian who had been a friend of St. Augustine.  It would later become more popular by a British theologian by the name of Pelagius.  At the heart of the movement were two issues:  the denial “for the need of divine grace and the doctrine of the generative transmission of original sin” (Ireland 38).

As noted above, Pelagianism teaches that original sin does not exist and that Adam left us a bad example.  Since his sin was merely a bad example, our nature is not corrupted, and we acquire the penalty of sin by our misdeeds.  This has huge ramifications when it comes to the concept of grace.  At its root it teaches the unrealistic thought that we can get to heaven by what we do, without the help of God.  Regarding this John Hardon writes, “We can always will and do good, even when de facto we will and do otherwise, depending entirely on our own moral strength” (Hardon).

Since we can do it on our own it lends to the ineffectiveness of sacraments, particularly that of baptism.  In this system baptism becomes a public declaration of faith and an incorporation into the church.  In fact, this is eerily similar to most Protestant denominations today.  Pelagianism makes grace superfluous to beatitude because it removes the need for grace.  If one can do it himself what is the need for God to be involved.  It makes Jesus into a wise moral teacher instead of the divine Son of God who came to take away the sins of the world. 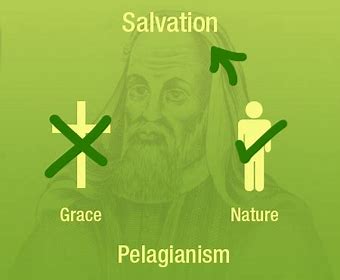