Thomas Aquinas is known as one of the greatest thinkers in the history of the church.  He was a prolific writer, and writings are still widely read today.  When it comes to Christology Aquinas had a lot to say, and his writings on Christology can be read in the third part of his Summa Theologica and his Commentary on Matthew.

His view on the incarnation was different because he assumed its necessity was hypothetical.  This does not mean that it was a theory and that it did not happen, but it was only a necessity if it was something that God had planned from the beginning.  Like Anselm and many others before him, Aquinas believed that nothing can coerce God.  In simpler terms, did God only ordain the incarnation as a result of the fall?  Or was the incarnation already put in place because God knew the fall would take place?

Through the fall man became separated from God, but through the incarnation this was remedied.  It was remedied because God sought to unite humanity to himself.  Though dawning a human body was below God, he loved us so much that Christ did it so we may be united with him.  Aquinas delves into two kinds of necessity.  The first necessity in one in which there is no way we can achieve the end.  There is nothing, as humans, that we can do to satisfy the due penalty for sin.  This is not possible because original sin has corrupted our very nature.  The second necessity spoken of is that of man being sufficient because of the actions of another.  In this case it is Christ who sustains us.

Aquinas goes on to say much more about the incarnation is section three of the Summa.  He answers the question of whether the incarnation should have happened at the beginning of time, or at the end.  His answer is masterful, but simple at the same time.  He quotes scripture to say that in the fullness of time Christ came to save sinners.  If this happened at the beginning of the world there would have been no sinners as the fall had not taken place.  If it happened at the end of the world then it would have been too late for those sinners scripture says he came to save. 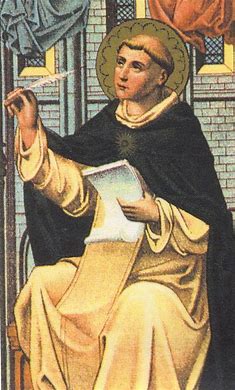 In conclusion Aquinas takes the best of those before him to assist in his Christology.  He is very proud to quote from Augustine, Anselm, John Chrysostom, and many others in support of his position.  His affirmed the necessity of the Hypostatic union and thinks that it is necessary for one to believe.  The unity of man and God was the work of the incarnation.  In the incarnation we find the love and forgiveness of God.  It was the decision of God, long before time began, that the suffering of Christ would be the material element of his love for humanity.