Located nine miles south of Tucson is an American treasure.  The San Xavier Mission was built as a mission for the Native Americans in the Arizona Territory, and it serves the same purpose today.  The mission still runs a school as it did in the early days of the mission.  The history of the mission is an amazing one in that its founding also laid the foundation for what would eventually become Tucson[1].  The mission was founded in 1692 by Eusebio Kino.  He was not the first European to enter Arizona, but he found 800 native people who were very welcoming and friendly.

The first church established on the mission was destroyed in 1753 in no small part because of strained relations between the Pima Indians and the Spaniards.  The building was not the only casualty as Jesuit missionaries and people sympathetic to the Spaniards were also murdered.  Spanish soldiers were sent in on a peacekeeping mission and things began to be as they were before, and as Steve Barnufsky states “Throughout all the turmoil the lone priest baptized five people in November that year, and 34 children were baptized at the beginning of the year[2].”

The current church began construction in 1783 by Father Velderrain who was a Franciscan.  This is significant because up until this time the mission had been run by Jesuits.  The Jesuits were expelled because of strained relations between Mexico and Spain.  The current structure was started with a 7,000 peso loan from a Sonoran rancher by the name of Antonio Herreros.  The local villagers were instrumental in the project as they worked on it from start to finish.  The almost completed structure was deemed complete 1797.  Money ran out so the east tower was not completed and paintings were left unfinished.  Over the west entrance is the start of an unfinished painting with the stenciling still present.

The mission church was a wonder of the frontier, and of the Arizona territory.  In a questionnaire from August 4, 1804 Tucson presidio commandant Jose Zuniga writes, “The entire structure is of fired brick and mortar.  The ceiling is a series of arches and domes.  The interior is adorned with 38 full-figure statues, three frame-figures dressed in cloth garments, and innumerable angels and seraphim[3].”

In 1844 the church became part of the Diocese of Sonora.  At this point in time the mission was without a full time priest.  There were a couple reasons for this, but the most prominent was the warfare going on between the Apache and Pima tribes.  The second is that severe drought had a stronghold over the land for about five years.  It was a difficult time for the church and the people, and the church fell into disrepair.  Father Diaz was the last resident priest in 1837 and he writes, “Mission property existed in name only, in hopeless disorder[4].”

This was very concerning to the diocese as they took over.  The bishop sent a circuit riding priest to the mission twice per year until a permanent pastor was found in 1848.  Each time he visited the people were excited as they can receive the sacraments that only priest could give.  During his six visits to the mission Father Bachiller don Trinidad Garcia Rojas baptized 49 people.

In 1854 Arizona officially became part of the United States as a result of the Gadsden Purchase.  As a result the bishop of Sonora was no longer responsible for the neglected mission.  This was a turning point for the mission as one famous artist H.M.T Powell predicted that the mission will fall to ruin within a number of years[5].  The Diocese took over management of the San Xavier Mission and provided priests and funds for restoration.  The people of the villages were excited and joyous that the church would once again be operating on a full time basis.

In 1865 Father Messea took over as Pastor at the mission.  In his interactions with the people and while touring the land he noticed that there were no schools nearby.  He then set out to build a school for the children which the mission served.  His efforts were noticed by the first governor of the Arizona Territory who wrote, “At the Mission of San Xavier del Bac, Padre Messaya, has a great trouble and expense to himself, educated all children free of charge[6].”  The school would struggle for the first few years as parents did not see the value of education for their children.

It was the school that was keeping priests in residence as they were also the teachers.  With no priests in residence the church was the target of theft and many priceless items were stolen.  Bishop Salpointe was able to raise enough money to have someone stay in residence as a deterrent.  In an interesting development the Presbyterian Board of Home Missions took an interest in the school and was able to reopen it in 1884.  Though it started back up with 15 students much of the subject matter did not matter to the students, and by December of 1888 the Presbyterians had left.

The school reopened in 1888 under the care of the Carondolet sisters (Who also founded two hospitals in Tucson), and has been in operation ever since.  In 1897 the Diocese of Tucson is created and the mission has had a permanent priest since then.  There has been damage to the church from an earthquake in 1887 and from the hot Arizona sun.  Funds have been hard to come by, but those on the Tohono O’dham reservation have pulled together in an attempt to keep the building from falling into disrepair.  The restoration effort was assisted when the Mission became a historic landmark in 1963[7].

Today the mission provided two masses Monday thru Friday, one mass on Saturday, and three masses on Sunday.  The school is still in operation and teaches around 80 children every year.  The children are educated free of charge, are fed breakfast and lunch, and are taught the Gospel on a daily basis[8]. 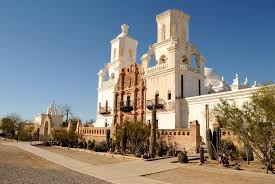 In conclusion the San Xavier Mission has a storied past.  It was almost lost to disrepair, but it was brought back from the brink by the management of the diocese in which it belonged, and from the love of the people it serves.  Father Eusebio Kino started the mission to advance the gospel and educate those in the vicinity of the mission.  The goal of the mission is the same as it was then.  Everyone is invited to the masses that the mission provides, but only the Native Americans living on the reservation can be baptized or married within its walls.  Perhaps the most fascinating aspect of this research was talking with those who sell food by the mission.  Hearing their stories of how their great-great-great grandfathers helped build it.  To the people of the Tohono O’dham nation the San Xavier Mission is also part of their family and heritage.