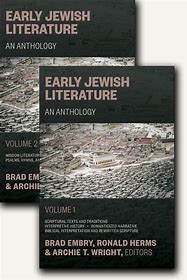 This book is an anthology that is made up of two separate volumes.  Each volume is well over 500 pages long and includes early Jewish works from the second Temple period.  For those unfamiliar with this period, it extends from 516 BC to 70 AD with the destruction of the temple by the Roman empire.  It is a crucial period, not only in Jewish history, but in the development and early years of Christianity.

Volume one details scriptural texts and traditions, this includes additions to Daniel, danielic texts recovered in Qumran, and the Maccabean books.  Each book has a detailed introduction detailing how it relates to the second temple period, who the likely authors are, and the theology behind it.  It is very fascinating a  must read for scholars of the Old and New Testament.  This volume also details the romanticized texts such as Tobit, and lastly delves into the Dead Sea scrolls and their importance during this period.

Volume two begins right away with ancient wisdom texts like Sirach and the Wisdom of Solomon.  Next it describes ancient apocalyptic literature such as the books of Enoch.  Lastly delving into Testamentary literature.  Volume two is laid out the same at volume one with detailed introductions, theologies, and excerpts that the reader can enjoy.

Works like this are important because it gives us an idea of what shaped Jewish thought during these pivotal years of the Second Temple period.  Students and scholars will benefit from the brief, but detailed introductions that this anthology provides.  If you like big books, then this one is for you.  It is well worth it.

{Note:  This book was provided free of charge from the publisher in exchange for an honest review.]