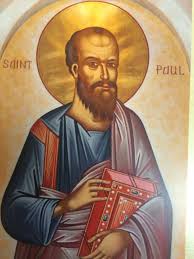 One of the central themes in all of Christendom is that of unity.  Though there are many denominations Christians everywhere consider themselves to be in the family of God.  However within the Catholic Church we have something that the other denominations do not.  We have the body, soul, and divinity of Christ present with us in the Eucharist.  In the Catholic Church we are a family, and in that family there are disagreements.  However when we receive the Eucharist we are submitting to our Lord and we become one with Him and with each other.  This unity is important in St. Paul’s first letter to the Corinthians.  This is a nice introduction.

During the course of St. Paul’s missionary journeys he founded the church in Corinth.  The community seemed to have a problem with individuality, but it is not what we think individuality to be.  This was not someone expressing their personality, but individuals who were selfish and put themselves before the welfare of the community.  Laurance states “Many of the Corinthian Christians believe that all that is important is to know the fact of their salvation, and that this fact liberates them from duties of love to their fellow Christians or even to Christ (Laurence, Page 71). There was an individual who was fornicating with his stepmother (1 Corinthians 5:1).  This is bad enough, but the church did nothing to correct the issue.  This vital issue had the potential of ending the young church.  They were taking each other to court instead of working things out internally (1 Corinthians 6:1-6).  How does this look to the unbelievers around them?  They were not setting themselves about and living the example of Christ and their beloved Apostle Paul.  There were many other things wrong with the church, but when it came to the Eucharist.  Many within the church strayed from what they believed and received in an unworthy manner.

Paul is begins his lesson by reminding the Corinthians of Christ.  Laurance states “Contrary to all worldly wisdom and all expectations, God’s power is manifested in Christ’s humbling of himself and finally acceptance of death (Laurance, page 71).”  As previously stated the Corinthians were worrying about their own desires and seemed to forget about the fundamentals of the Gospel.  We are to act like Christ, and they were doing everything but that.

Christ loved us so much that He humbled himself and died for our sin.  Paul was reminding the Corinthians of this and the duty to love others more than yourself.  This is important in preparation to receive the Eucharist.  In mass we offer each other a sign of peace and we pray for each other.  It is in these prayers and offerings of peace that we humble ourselves and place ourselves at the service of others.  Paul was trying to emphasize the importance of this in proper Christian living.

To go along with this the Corinthians were not coming together properly to celebrate the Eucharist.  1 Corinthians 11:20, 21 says “When you meet in one place, then it is not to eat the Lord’s supper, and one goes hungry while another gets drunk.”  Those that were well off in the world were flaunting it in the faces of those that had nothing.  This had the effect of making those less fortunate feel ashamed and it brought disgrace on the Church (1 Corinthians 11:22).  Paul, as a disappointed father, tells them he is ashamed.  Laurence states in plainly “To celebrate it (Eucharist) in a context of selfishness and division is to violate its very nature, to reject Christ who at the Last Supper and in his death shared himself completely.  Such a violation results in condemnation rather than blessing (Laurance, page 72).”

One could get the feeling from reading Paul’s letter that the community was in peril.  Someone was concerned enough to leak this information to Paul, and he swiftly wrote this epistle condemning their behavior.  Paul does this is a way that a father corrects a child.  He does it with love and he is trying to teach them by example.

Paul is telling the Corinthians, and us, that the Eucharistic meal is one which is firmly rooted in family.  In 1 Corinthians 11:26 Paul writes “For as often as you eat this bread and drink the cup, you proclaim the death of the Lord until He comes.”  After performing the first mass at the Last supper our Lord was betrayed.  He was whipped, beaten, and had nails driven through His hands and feet.  To take this lightly one may as well be at the scene of the crucifixion with a hammer in hand.  We gather to remember that the Lord gave Himself for us and we are to follow His example by giving ourselves to each other.  If a member of the church lost a loved one then we all did.  If a member of the church is sick we are to all pray.  We are to help each other get to heaven, not step all over each other so we can get there first.

Paul reiterates the point of the Eucharist as a means of bringing the community together in 1 Corinthians 11:33, 34.  These verses read “Therefore, my brothers, when you come together to eat, wait for one another.  If anyone is hungry, he should eat at home, so your meetings may not result in judgment.  The other matters I shall set in order when I come.”  Remember that there were certain members of the congregation that were using the church meeting as their own personal buffet.  This passage is not saying that one should not feed someone who is hungry, but is saying that everyone should get a portion of the body and blood of Christ in the Eucharist.

The Eucharist is the high point of the church meeting.  We recall how unworthy we are to receive the Blessed Sacrament, and ask God to forgive us of our shortcoming and fill us with His grace.  We ask for the prayers of our brothers and sisters in Christ, and they ask the same of us.  Paul is trying to tell the Corinthians that we are in this race together, and is beneficial and necessary that we help each other as a family. 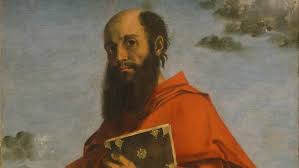 2 thoughts on “St. Paul and the Eucharist”