The Council of Chalcedon took place a mere twenty years after the Council of Ephesus.  Its impact on Christology and doctrine is one that cannot be understated.  The council came about because of a new teaching on the nature of Christ by a monk by the name of Eutyches.  To summarize his view, he taught that Christ had two natures, but after they were united they were only one.  He was an opponent of Nestorius, and his way of describing the nature of Christ was damaging.  This way of putting it seems to destroy both the humanity and the divinity of Christ. Sadly, this is not far from the belief of many Christians today.

Chalcedon affirmed that the natures of Christ do not change, and in doing so they avoided Nestorianism.  However, the story of the council started before that with the afore mentioned story of the monk Eutyches.  Upon hearing of Eutyches explanation regarding the nature of Christ, Patriarch Flavian felt he had to respond to the matter.  Flavian, then patriarch of Constantinople, held a synod and condemned the teaching of Eutyches.  Flavian was upholding orthodox teaching, but issues of Christology were still being worked out in the ancient world.  Eutyches would find an ally in the bishop of Alexandria by the name of Dioscorus, who just happened to be Cyril of Alexandria’s cousin (Norris 29).  According to Richard Norris, “Dioscorus, with imperial support, presided over a council in Ephesus” (Norris 29).  This council deposed of Patriarch Flavian and restored Eutyches.

Prior to this deposition, Pope Leo had sent a letter of support to Flavian accepting the decision of the synod he held on behalf of the whole church.  Pope Leo called the council that reinstated Eutyches a “rubber synod” and invoked the authority of the Roman church (Norris 29).  Leo’s demand for a new council was answered and Bishop Dioscorus was removed from his bishopric immediately.

The council’s statement of faith was not trying to declare how the natures of Christ could be, but was declaring what over 400 years of Christian witness could not deny.  The council reiterated the two natures of Christ, which was a concern Nestorius had though he argued for it in a heretical manner.  The council also affirmed the view held by Cyril at the Council of Ephesus within the tradition established at Nicea.  The Tome of Leo was also a factor in the definition at Chalcedon.

The “definition” at Chalcedon affirms the creeds of Nicea and Constantinople when it comes to defining the redemption and the person of Christ (Norris 30).  The council also stated that the extreme forms of Christological tradition in the Antiochene and Alexandrian schools were now condemned (Norris 30).  The definition is closed with a statement that was composed based on the wishes of the emperor.  As Norris writes, “This statement, draws for its language on Cyril, Leo, and the Formula of Reunion” (Norris 30).  It emphasizes the Unity of Christ in his complete deity and complete humanity.  More importantly it says that Christ exists in two natures and not out of two natures.  It is because of this language that the definition accepts the emphasis of both Antiochene and Alexandrian schools. 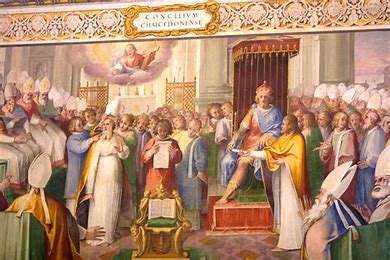 One thought on “Chalcedon and the Condemnation of Nestorianism”