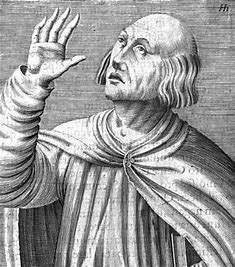 From the time of the apostles until the 9th century the real presence of Christ in the Eucharist was unchallenged.  It was accepted as fact, and the faithful never questioned it. Paschasius Radbertus and Ratramnus were the two central figures in this first eucharistic controversy.  St Paschasius was abbot of Corbie in the early 9th century, and he wrote extensively about the Eucharist in his work On the Body and Blood of the Lord .  He wrote that the Eucharist is truly the body and blood of Christ and that he dwells in us.  He dwells in us because we partake of him, and because of that we are one with Christ.  In writing to a monk under his tutelage he writes, “Christ however lives on account of the father, because he was born the only begotten one of the father, and we live on account of him, because we eat him”.  St. Paschasius came to this conclusion from sacred scripture and testimony of the Church Fathers (Catholic Encyclopedia).  This view would be challenges by a fellow monk by the name of Ratramnus.

Ratramnus was monk whose superior was St. Paschasius.  Ratramnus’s view on the Eucharist was quite different that his superior and is documented in his work also titled “On the Body and Blood of the Lord”.  He explained, as most Protestants do today, that in the body of Christ is received “in figure”.  It is not a physical manifestation but is a spiritual reality.  He denies the real presence of Christ in the Eucharist and insists that Christ is present in faith.

In these two men we see a conflict of two worldviews.  In Ratramnus we see a separation from the sacramental worldview that had been firmly established.  We see the separation of physical and spiritual realities in which God has interacted with man since the beginning of creation.  This separation has a domino effect and centuries down the road would manifest itself in humanism and a materialist worldview, though that was not his intention.  In St. Paschasius we see that the physical contact with the risen Christ was part of what salvation was.  Through that physical contact of consuming him we came into union with the Holy one.  He is in us working to transform us and make us like him. 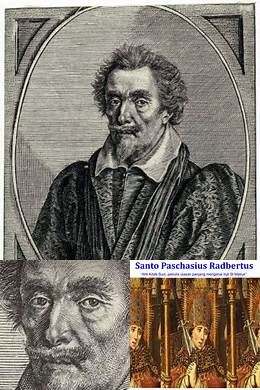