Within theology there are many different topics.  One such topic is known as Christology, and it deals with who Jesus is.  It deals with his nature, divinity, and how it is portrayed within the New Testament.  There are many views of Christology that have been debunked over the years, and some are still taught today.  Who was Jesus, and how does his Jewish heritage affect our understanding of the New Testament?

When we read the New Testament, we tend to read it through modern eyes.  We read the Gospel accounts and see the divinity of Christ, but we often overlook key aspects that assist us in understanding him in a deeper way.  We may have a good understanding of the doctrines that Christ preached, but pay little attention to his relationships and social interactions (Carter 150).  In fact, understanding the Jewishness of Christ will have a big impact on our exegesis of the New Testament.  By viewing the Jewishness of Christ, we are removing the presuppositions of western culture, and placing the New Testament back into its cultural and societal context.

One thing that many see Jesus as doing is abolishing the law, but is this really accurate?  Certainly, there are some things a that are no longer applicable under the New Covenant, but Jesus tells us himself that he came to fulfill the law in Matthew 5:17.  This seems to indicate that He recognized his Jewishness and embraced it.  Regarding this Gerald Collins writes, “We throw away any right to comment on the way Jesus perceived reality, if we ignore the earthly particularity of his language (Collins 47).

Jesus spoke in a manner in which his Jewish audience would understand.  Like other Rabbis of the time, he taught lessons by telling a story.  One example is His example of putting new wine into old wineskins in Luke 5:36. A surface reading of the text suggests a disagreement between Jesus and the Pharisees in regard to Jewish dietary laws.  These parables give us peeks into Jewish culture, and a proper understanding of them assists us in understanding the New Testament in a fuller way.

As previously stated, we tend to read these parables within the context of our western culture, but to do so is to miss the point.  By reading scripture in this manner we run the risk of coming to a conclusion that in totally foreign to the intention of the text.  That has ramifications for how we engage the rest of the New Testament.

Jesus was Jewish, and the first Christians were Jewish.  The worshipped in the synagogue, kept kosher dietary laws, and strove to keep other aspects of the law.  Most Christians are gentiles, and as a result it becomes hard to imagine Jesus as a Jewish man.  We say it, but it is something that comes from our mouth with little understanding of the ramifications.  This means that the Gospels should be seen as a conflict between Jesus and the Jewish leaders of his day, particularly in regard to the interpretation of the law.  It also means that we measure what Jesus said with the understanding that he was a Jewish Rabbi in 1st century Palestine.  These two things may be difficult for us to grasp, but when we do so we see the New Testament in its proper context, and the message of scripture become more fully alive. 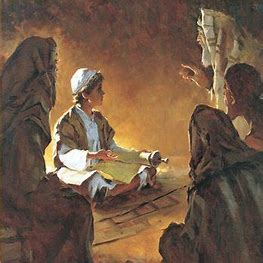