When one begins to study sacred scripture the idea of mystery becomes very apparent.  The New Testament and Septuagint speak of the Greek word Mysterion.  When St. Jerome was translating the Hebrew and Greek manuscripts into what would be the Latin Vulgate, he used the word sacramentum, or sacrament in English. In fact, the sacraments are celebrations of the mysteries of God. The Old Testament has no shortages of these mysteries that give us clues of the nature of God and the sacred mysteries.  This paper will seek to define mysterion, give examples of how these mysteries help reveal God’s identity, the role of ritual and sacrifice, and how God chooses to communicate with His people.

The word mystery is an anomaly of sorts.  In some circles it is something that is not to be questions, but to be accepted.  To others it is an invitation to explore, learn, and grow.  At most basic level a mystery is something hidden, and the information needed to understand is not available.  When it comes to God it is the opposite.  God is not some cosmic force that wants to remain hidden from us.  He was us to know Him, and he wants to be known by us.  We come to know these mysteries of God through our senses, reason, and faith.

It is through our physical senses that we get to know the word around us.  We learn what things smell like, we can see, hear, and see that this amazing world came from something.  Science tells us that everything has an origin and cannot come from nothing.  It is in this way that our senses testify to the existence of a creator.  Secondly, we come to know these mysteries through the uses of our reason.  We come to knowledge of the meaning and purpose of creation, even the creation of our own human lives, through our ability to reason.  Through reason we enter into relationship with God.  Lastly, the third way we understand the mysteries is through faith.  The utilization of faith informs reason and is necessary for a personal relationship with God.

In the Old Testament there are many examples of how these mysteries reveal God’s identity, his relationship with humanity, and the nature and destiny of humanity.  God’s identity is perhaps one of the biggest mysteries of all because he is transcendent and outside of time.  We get a clue in the book of Exodus when God and Moses are interacting.  The passage in question is Exodus 3:14 when Moses asks for God’s name, and God relies “This is what you shall tell the Israelites I AM sent me to you” (NAB).  He also has power over creation as he can calm the storms and cause beasts to retreat. This reveals a God who is creator or all and nothing is above him.  This has huge implications when it comes to God’s relationship with humanity.  God is not inaccessible and not wanting to be discovered, but quite the contrary.  Humanity was made in the image of him who is existence itself.  We read this in Genesis 1:27 which states, “God created man in his image; I the divine image he created him; male and female he created them” (NAB).  This shows that we were made to be in relationship with God.  When we are in proper relationship we are that image of the divine creator, but when we sin and reject him we die.  We have turned our back on God as is seen in Genesis 3:19. The nature and destiny of humanity is to live.  God created man in his image, and he uses our physical senses to make him.  He uses all means or creation, including the human body, to make himself known.

Within the Old Testament there are also many lessons regarding the priesthood and the role of ritual sacrifice and offerings.  Regarding the priesthood, it is vital to understand that it is God who chooses and calls an individual to the priesthood.  It is through the priesthood that pleasing sacrifices are offered to God to maintain the Abrahamic and Noahic covenants.  In Numbers chapter 16 Moses describes the corrupt priests Korah who stood against Moses and Aaron.  Not everyone has a claim to the priesthood because it is God who calls him.  Scripture states this very clearly in Numbers 16:5 when Moses states, “May the Lord make known tomorrow morning who belongs to him and who is the holy one and whom he will have draw near to him!” (NAB).  Later is verse 10 Moses states that it is God who allows the priests to approach him, and all the evil priests of Korah were destroyed.  In Genesis 8:20 Noah offered a burnt offering for the Lord made a covenant to never destroy the Earth by flood.  Likewise Abraham, then known as Abram, built an altar and offered a burnt offering to God and God made a covenant with him.  This shows that ritual and sacrifice are important ways in which God communicates with his people through his priesthood.

In the Old Testament God also uses special ways to communicate with his people.  One such example is with Moses in the book of Exodus.  In Exodus 3:3 God uses the burning bush to communicate with Moses.  Moses was intrigued by the site of a bush that was on fire but was not being destroyed.  When Moses approached God told him to take his sandals off because it was holy ground.  Another example with Moses is seen in Exodus 4:1-4.  Moses was balking at the mission that God gave him to do.  God told Moses to throw down the staff that he gave him, and the staff turned into a snake.  God then told him to pick it up by the tail, and it turned back inti a staff.  This got the attention if Moses, and Moses returned to Egypt to confront Pharaoh.  Another example of God communicating with his people is the prophet Daniel.  In Daniel chapter 2:19-23 God communicated with Daniel in a dream.  In fact, there are many times in sacred scripture where God communicates through dreams.  One has to be in close relationship with God to discern if it is truly God speaking. 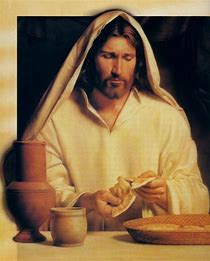