The legacy of Vatican II is one that can bring up mixed emotions.  Many see the council as something that was needed, but the implementation was flawed.  Others go as far to say that the Church broke from its sacred duty with the council.  No matter what view one may take, the council’s influence is still felt within the Church, and within the world.

The world was changing in the twentieth century, and the Church needed speak of its relevance in a culture in the face of a modernist society.  The tone of the council is one that is vastly different than it 19th century counterpart Vatican I.  Vatican I addressed the issue of Papal primacy and infallibility, and at time did so in a triumphalist tone. The Vatican II council fathers, addressed issues, but did so in a tone that seemed to me for inclusive.  This inclusion did not change doctrine or tradition.

The tone was one of a Church seeking dialogue and was welcoming.  Regarding this Christopher McMahon writes, “Furthermore, the tone of the Church is far less trimphalistic than seen in the controversies surrounding the battles between the Church and secularism in the nineteenth and early twentieth centuries” (McMahon 90).  This paper will look at the legacy of the Vatican II documents concerning ecumenism, interreligious dialogue, and religious freedom.

As previously stated, the council father of Vatican II used a different tone than was used in previous councils.  Gone were the words, but still agreed upon by Pope Pius IX, “We must hold as of the faith, that out of the Apostolic Roman Church there is no salvation” (EWTN).  Though this is the consistent teaching of the Church, it is something that is seen as a negative by other Christian groups.  The Vatican II document Unitatis Redintegratio, or decree on Ecumenism, lays a foundation that helps to foster further communication among Christians of all kinds.

The document lays out the case that it is the will of the Lord Jesus Christ that all Christians be unified.  We see this in his high priestly prayer in John 17.  Our Lord states in John 17:20-21, “I do not pray for these only, but also for those who believe in me through their word,  that they may all be one; even as thou, Father, art in me, and I in thee, that they also may be in us, so that the world may believe that thou hast sent me” (RSV).  The thousands of denominations that are in Christendom provide an obstacle to missionary work.  In paragraph one of the Decree on Ecumenism the council fathers state, “Certainly, such division openly contradicts the will of Christ, scandalizes the world, and damages the sacred cause of preaching the gospel to every creature” (UR, para 1).

The council’s legacy on Ecumenism goes further that stating the obvious about the divisions in Christianity.  In regards to Protestants previous councils, such as the Council of Trent, openly anathematized those who were not part of the Church.  Vatican II, while still saying that are not in full communion, call our Protestant brothers and sisters separated brethren.  This can be seen in para four on the decree on Ecumenism, “Catholics must gladly acknowledge and esteem the truly Christian endowments from our common heritage which are to be found among our separated brethren” (UR, para 4).

This language of the Church continues today, and Catholics are encouraged to be in dialogue for the good of the whole Christian community.  It is not a Catholic versus Protestant mentality, as this is not the will of the Lord.  By virtue of their Trinitarian baptisms our Protestant friends are worthy of the title of Christian.  The call of Vatican II was also seen in the 1996 encyclical by Pope Saint John Paul the II titled Ut Unum Sint.  In the opening paragraphs the document lays out the intentions of the Holy Father.  In it he writes, “The courageous witness of so many martyrs of our century, including members of Churches and Ecclesial Communities not in full communion with the Catholic Church, gives new vigor to the Council’s call and reminds us of our duty to listen to and put into practice its exhortation “(Ut Unum Sint para 1).  As a result, the legacy of Vatican II regarding Ecumenism is once again shown in our time.  The Church is committed to the cause as Christian unity is something that we should all strive for the sake of the gospel.

To Catholics today the decrees of Vatican II may seem to be from that of a bygone era, but they are a vital moment in the history of the Church (McMahon 75).  In the previous paragraphs we see the legacy it left with ecumenism.  The legacy is great in the area of interreligious dialogue.  In fact, it can be said that without the Church’s commitment to ecumenism that its strides in religious dialogue would not have made the strides it has.

This commitment can be seen in the Church’s communication with leaders of the Eastern church’s.  The Eastern Orthodox churches have valid orders, apostolic succession, and valid sacraments.  However, the issues of the Great Schism (such as Papal Primacy and the Filioque), are still prevalent.  The council fathers drafted Orientalium Ecclesiarum, or the Decree on the Catholic Eastern Churches.  Of special consideration here is the emphasis on those eastern churches that are not in communion with Rome.  The council fathers write in paragraph 25, “Nothing more should be demanded of separated Christians who come to catholic unity under the influence of the grace of the holy spirit” (OE 25).

As a convert this section was very telling as it is applicable to converts that make the Catholic profession every Easter vigil.  The Church sees baptism done in the trinitarian formula as valid, no matter the denomination.  Our Eastern Orthodox brothers and sisters have received valid sacraments, and the church has the door wide open for them.  The same can be said with the Anglican, as several Anglican ordinariates have popped up across the world.  Vatican II left a legacy of teaching the faithful to find common ground with all religions to further the cause of humanity, and also as a means to evangelize.  To this end Pope Francis at the plenary assembly for the Pontifical Council for Interreligious Dialogue states,

It is for this reason that interreligious dialogue and evangelization are not mutually exclusive, but nourish each other. We do not impose anything, we do not use any underhanded strategy to attract the faithful, but witness with joy and simplicity to what we believe and who we are (pciinterreligious.org).

The thirteenth document of the Council was the Declaration on Religious Liberty, or Dignitatis Humanae.  This document is controversial because some think that it breaks with earlier magisterial writings which describe the governmental role of suppressing religious error.  One document that is often cited is an encyclical by Pope Gregory XVI titled Mirari Vos.  Paragraph thirteen of that document states, “This perverse opinion is spread on all sides by the fraud of the wicked who claim that it is possible to obtain the eternal salvation of the soul by the profession of any kind of religion, as long as morality is maintained” (MV para 13).

The irony is that this encyclical, and the Vatican II document on religious liberty are not in conflict.  The Council fathers address this very quickly in the document and say that the Catholic Church is the “true religion and one church of Christ” (DH para 1).  The document lays out the case that it is a matter of human dignity that one should not be made to act contrary to one’s conscience.  As such there should be no government coercion, and people should not be made to feel less than human if they adhere to a different religious creed.

This concept of religious liberty is one that we see engrained in American culture, and in other denominations.  Our Baptist friends as an example were founded on the very concept of religious freedom, and advocate that for all as well.  Religious freedom has become a hallmark of our society, and that is part of the legacy that the council leaves behind.  While advocating for the rights of the individual, the church maintains its traditional stance towards the faith and still advocates for the proclamation of the gospel message. 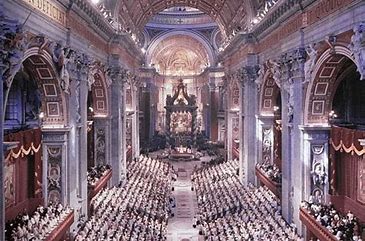 In conclusion, the second Vatican council left a legacy that has left the Church in a better place to evangelize the world.  Though the implementation of the council was less than desirable that is not the fault of the council itself.  The church continues to demonstrate its commitment to ecumenical dialogue, with the end goal being Christian unity in the face of a world that desperately needs it.  More than ever before Church leadership is speaking more with leaders of other faiths and denominations.  And lastly, the Church is embracing its motherly role in advocating for the protection of those who practice another religion altogether.  The combination of these three allows all members of the Church to evangelize more effectively.  Though the council is without controversy, its legacy lives on and its effects are still felt today.

Pope Francis.  “To Participants in the Plenary Assembly of the Pontifical Council for Interreligious Dialogue”.  PCIINTERRELIGIOUS.ORG. November 28, 2013. Web.