Within Christendom Ecclesiology is looked at in a variety of different ways.  Within Protestantism the church may be seen within a synod, a presbytery, or an autonomous unit.  Within Catholicism Ecclesiology revolves round the sacrament of the Eucharist and those who are in union with the Bishop.  This is what is known as communion ecclesiology.  In this paper, the development of communion ecclesiology will be seen from sacred scripture, the church fathers, and councils.

From its humble beginnings, the church has taught the centrality of the Eucharist.  There are those that say that this practice started later within the church’s history, but its roots can be found within the pages of sacred scripture.  Saint Matthew, Saint uke, and Saint Paul both write about the institution of the Eucharist at the last supper.  In Matthew 26:26 Matthew writes, “And whilst they were at supper, Jesus took bread, and blessed, and broke: and gave to his disciples, and said: Take ye, and eat. This is my body (Douay-Rheims).”  Saint Luke’s account in Luke 22:19 we read very similar language, “And taking bread, he gave thanks, and brake; and gave to them, saying: This is my body, which is given for you. Do this for a commemoration of me (Douay-Rheims).”  In koine Greek, the language of the New Testament these inspired writers use the word esti.  This one word is so significant because reiterates what we read in the english translations.  According to Strong’s concordance this word is translated into English as is, are, consists, and come.

In short, this word contains the whole of communion ecclesiology.  In the original language, our Lord said that the bread and wine are his body.  He did not say that they are like his body, or are symbolic of his body.  Saint Paul takes it a step further in 1 Corinthians to remove any doubt about the real presence of Christ in the Eucharist.  In chapter eleven of 1 Corinthians he writes that he received the words from Christ himself.  The church at Corinth had been treating the Eucharist in a very irreverent manner.  People were feasting, and there were some who were unable to participate.  As if that were not bad enough, there was also a man who was having sexual relations with his stepmother (1 Corinthians 5:1).  By acting in this manner this individual broke communion and was no longer in union with the church.

The theme of communion ecclesiology is continued in the ministry of the early church fathers.  The patristics have a lot to say about the centrality of the Eucharist and the authority of the bishop.  Saint Ignatius of Antioch paragraph twenty of his letter to the Ephesians writes, “Come together in common, one and all without exception in charity, in one faith and in one Jesus Christ, who is of the race of David according to the flesh, the son of man, and the Son of God, so that with undivided mind you may obey the bishop and the priests, and break one Bread which is the medicine of immortality and the antidote against death, enabling us to live forever in Jesus Christ.”  Also in his letter to the Philadelphians St. Ignatius states, “Take care, then, to use one Eucharist, so that whatever you do, you do according to God: for there is one Flesh of our Lord Jesus Christ, and one cup in the union of His Blood; one altar, as there is one bishop with the presbytery and my fellow servants, the deacons.”

St. Ignatius makes it clear that it is the Eucharist is of vital importance to the Christian faith.  The Eucharist can only be consecrated by someone who is ordained in Apostolic Succession.  He must be in communion with the bishop and hold that the Eucharist is truly the body and blood of the Lord Jesus Christ.  In regard to this Saint Pope John Paul II writes, “This explains the lively concerns which finds authoritative expression in the work of the Councils and the Popes (Ecclesia de Eucharista, 9).”

Throughout history we can see the role that communion ecclesiology has played in fighting heresy.  In the second century, the Gnostics claimed to have secret teaching that they received directly from the apostles.  The Gnostics believed all matter to be evil, and since the eucharist consisted of matter they opted to abstain.  In his pivotal work, Against Heresies, St. Irenaeus outlined what became known as the rule of faith.  St. Irenaeus writes, “The Church, though dispersed throughout the whole world, even to the ends of the earth, has received from the apostles and their disciples this faith (Roberts 486).”  To be validly part of the universal church, it was understood that one had to be under the authority of the bishops in apostolic succession.  He goes on to say that although language vary, the traditions and teachings of the church remain the same.

As if this were not enough to deduce that the Gnostics were not in communion he goes to the Eucharist.  Regarding the Eucharist St. Irenaeus writes, “But our opinion is in accordance with the Eucharist, and the Eucharist in turn establishes our opinion. For we offer to Him His own, announcing consistently the fellowship and union of the flesh and Spirit (ccel.org).”  These are only a sampling of Irenaeus’s treatises, but they establish that the church had an understanding of what it meant to be in communion.

Throughout history there have been those who challenged this communion.  As a result, they broke away and developed various ecclesiological systems that were vastly different from what has been passed down in the church.  We are rapidly approaching the 500-year anniversary of the Protestant Reformation.  This development caused a division in the church, and at the heart of this divide was authority.

As previously stated, one of the components of communion ecclesiology is the apostolic succession of the bishopric (CCC, para 1142).  The church is visible institution with validly ordained clergy who administered the sacraments for the faithful.  However, the concept of a visible church was one that did not sit well with the reformers.  In their eyes, the church was an invisible entity and made visible only by the work of its members.  In describing this concept Dr. Christopher McMahon writes, “Although Luther and Calvin, the two patriarchs of the Reformation, disagreed on many issues, including substantial ecclesiological issues, they both agreed with their predecessor, Jan Hus, on the theological emphasis on the primacy of an invisible church (McMahon, 63).

The Council of Trent set out to combat the teachings of the Reformation, and to address certain reforms within the church.  As previously stated, the reformers grew to distrust the established institutional structures of the church.  As a result, they said that the church was made up of believers who were truly converted.  By all accounts to council was successful in its aims, and reiterated the historic teaching of a visible institutional church (McMahon, 66).  One prominent figure during this era was Cardinal Bellarmine, and he addressed the topic of the visible church quite well.  He wrote in his treatise De Controversiis, “Our view is that the church is only one reality, not two, and that this single and true reality is the group linked by profession of the same faith and by communion in the same sacraments (McMahon, 66).”

This concept of communion ecclesiology has been carried on into our own time.  The second Vatican Council addressed this issue in a number of areas, and Saint Pope John Paul II addresses it at length in his great encyclical Ecclesia de Eucharistia.  In that document, the Holy Father discusses how our baptism is renewed whenever we partake of the Eucharist.  By doing so we are entering into sacramental communion with each other (Ecclesia de Eucharistia, para 22).

In the second paragraph of the Council document titled, Unitatis Redintegration, the council fathers state, “In His Church He instituted the wonderful sacrament of the Eucharist by which the unity of the Church is both signified and brought about (Decree on Eucumenism, para 2).  This statement is strengthened by other council documents such as the decree on Ministry and Life of Priests.  In article six of that document the council fathers discuss how no Christian community can be built unless the Eucharist is at the center of it. 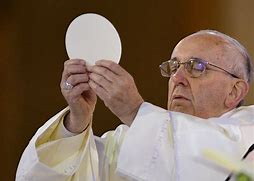 Communion ecclesiology, as Pope Emeritus Benedict the XVI states, “is in its inmost nature a Eucharistic Ecclesiology (Ratzinger, Kindle location 1634).”  Throughout its history the church has rallied around the Eucharist as the pinnacle of Christian worship, and has taught that this same Eucharist can only be administered through those in communion with the Bishop.  The Bishop in this case is the Holy Father, the Bishop of Rome.  Through this communion we can confidently know what has been taught by the apostles, and how to live the Christian life.

Pope John Paul II. Encyclical on the Eucharist in Its Relationship to the Church Ecclesia de Eucharistia