Paul was the greatest missionary and evangelist in the history of the Christian church.  His background as a Pharisee gave him a great understanding of Jewish law.  He used this to his advantage on several occasions.  Though his greatest missionary trips were to gentile lands he used his rabbinical training to relate to Jews as well.  In Philemon 3:5 Paul calls himself the “Hebrew of Hebrews.” [1]   This phrase indicates that Paul was born of Jewish parents and probably learned “Aramaic and traditional Jewish customs at home.” [2]  He was trained by the Pharisee Gamaliel who is mentioned in Acts 5:34-39 as saying if Christianity is not of God it will die out [3].  Paul deviated from the advice of his teacher and did everything to destroy the church prior to his conversion.

There is little, if any, information about the early life of Paul.  It appears that he was born in A.D. 10 as Saul in Tarsus, and at the age of fourteen shipped off to Jerusalem to train under Gamaliel [4].  Rabbis were also trained in a trade so they can survive in society, and Paul was trained as a tent maker.  This would prove valuable in his various journeys as this was his way of supporting himself.  Ironically this is pretty much all we know about his early life.  Everything else comes from the book of Acts.  Acts is vitally important to understanding how zealous Paul was for Judaism, and how passionate he was to destroy Christianity.  Not only have that, but the absence of clear dates made it “difficult to establish accurately the dates for the events in Paul’s life.” [5]  With that being said we have some external sources that tell us of events.  One of those is the Gallio Inscription which suggests that “Paul appeared before Gallio in Corinth either in the Summer of A.D. 51 or 52.” [6]  The Martyrdom of Paul occurred under the tyrant Nero around A.D. 64.  Evidence for this is found in the book of 1 Clement 5-6.  The book of Acts is vital in determining a chronology of events in the life of Paul as there is little other evidence out there.  I speculate that this is because Nero was doing everything to kill off Christianity, and this included any historical references.  Of course this is pure speculation on my part.

The Apostle Paul engaged in three missionary journeys.  After his conversion he “stayed in Damascus a short time (Acts 9:19b) before leaving for ‘Arabia’.” [7]  Little is known about what precisely happened there.  It is speculated that he was “hammering out his theology.” [8]  We do know that he went from Arabia, then at the request Barabas went from Jerusalem to Antioch.  “While they were in Antioch, Paul and Barnabas took gifts from the church at Antioch to relieve poverty among Jerusalem believers.”  [9]  They then went on Cyprus with John Mark to minister to the Jews.  Upon being rejected they found great success in ministering to the Gentiles.  On the second journey Paul refused to take Mark.  Paul then went to the churches in “Asia Minor, Lystra, Iconium, and Derbe.  He crossed the Aegean sea and for the first time visited Philippi, Thessalonica, Berea, Athens, and Corinth [10].  On the third trip he visited the same places as before, but spent three years in Ephesus.  He was then arrested and held for several years. 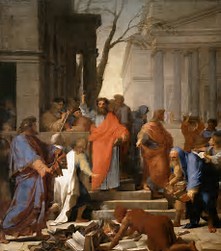 One thought on “Apostle Paul and the Book of Acts”