But after he had considered this, an angel of the Lord appeared to him in a dream and said, “Joseph son of David, do not be afraid to take Mary home as your wife, because what is conceived in her is from the Holy Spirit. 21 She will give birth to a son, and you are to give him the name Jesus, because he will save his people from their sins.”- Matthew 1:20-21

Joseph is often overlooked when it comes to the Christmas story, but he is really the unsung hero of it all.  When Mary was pregnant he at first resolved to divorce her in a quiet manner.  This may sound harsh, but the law of the time called for much worse.  It called for stoning, but by intending to go the other route he was showing a great love for his Bride.

Joseph chose to listen to the word of God and continue the marriage rituals.  This was at great risk to his life and the life of Mary.  He chose to take on the task of the being the earthly father of the Savior of the world.  What is God calling us to do with our lives?  Will we choose to be like Joseph and be obedient even when faced with great danger?  By no means is this meant to be an exhaustive study of Joseph.  Much more could be said about this amazing Biblical figure.  He was obedient and so should we. 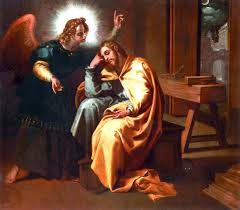 One thought on “A Special Calling”